In-Depth Knowledge of the Forest

Exhaustive Inventories to Monitor the Development of Québec’s Forests

Forest management is based on a unique system of highly effective forest inventories that is acknowledged throughout the world: The inventory work allows forest growth and changes in the forest canopy to be monitored over time. Many other studies are also performed to obtain leading-edge scientific information that is used to support decisions concerning sustainable forest management and to ensure that the territory is put to the best possible use.

The Chief Forester: Transparency and Independence

In Québec, allowable cuts are calculated by the Chief Forester, an office created to ensure that this operation is performed independently. The Chief Forester estimates the volumes of wood that can be harvested every year, without exceeding the production capacity of the forest. This is the principle of sustained yields. The Chief Forester uses the forest inventory findings and the latest scientific information as a basis for the calculations, and considers a host of variables including wildlife habitat needs, protection measures for watercourses and old-growth forests, protected areas, yields from silvicultural work, the risks associated with natural disturbances, and so on. To avoid overcutting, harvests must not exceed the Chief Forester’s calculations. During the period 2008-2013, the average harvest accounted for 52% of the allowable cut for all species. The situation was similar in the boreal forest, where the harvest for the last five years accounted for roughly 65% of the allowable cut across all species. There is no deforestation in Québec. Post-harvest changes to the forest canopy are temporary in nature, and the forestry vocation of the land is always maintained. All areas that are logged must be regenerated to achieve a production status that is at least equivalent to pre-logging levels. 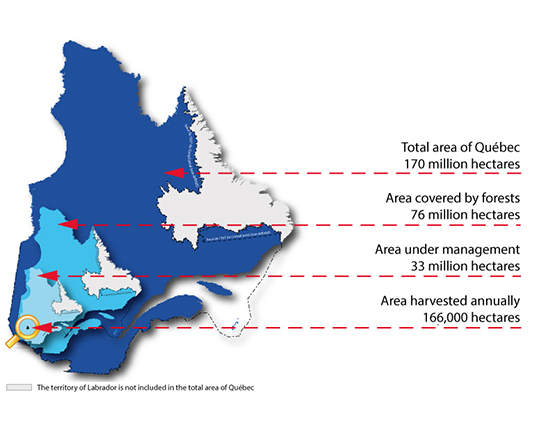