You have found an orphaned wild animal

Before taking any action, make sure that the animal is truly orphaned! 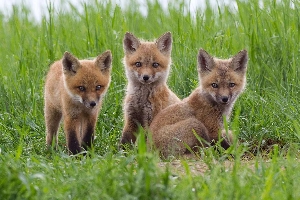 Wild animals have evolved to survive in nature, and a lack of knowledge of the species’ biology can lead well-meaning citizens to take actions to “save the animal” that will actually decrease its chances of survival. In most cases, the best option is not to intervene and to let nature take its course.

In many species, it is normal for parents to leave their young alone for extended periods of time. While this behaviour may seem strange to us, it is intended to increase the chances of survival of the young. For example, snowshoe hares will separate their young from each other and hide them in different spots in the environment, which will prevent that all leverets from the same litter be eaten if a predator discovers them.

Thus, intervening on the simple observation that a young animal is alone in the forest often makes it an orphan animal, when in fact it was not! This hastily done action could jeopardize the animal’s health or survival.

It is essential to observe the animal believed to be orphaned at a minimum distance of 20 to 30 metres and without being visible in order to allow its parent to return without fear. If parents perceive the presence of a human, who to them is a predator, they will not approach their young. It is even better to leave the premises completely and return to check the situation every two to three hours. Observation from the inside of a building, when possible, is even better. It should be noted that most mammalian species are active in the evening, at night or at dawn, which is why the parent may not return until that time. Therefore, it is important to avoid taking the animal to protect it for the night, as this could interfere with the care provided by the adult.

If the animal seems to be alert, it is probably because its parents are still taking care of it. An unfed young animal quickly loses energy. It is therefore preferable to leave it alone and continue the observation remotely. In addition, unnecessary flight should be avoided since a prolonged pursuit can be risky and harmful to the animal.

If, as a result of your observations, the animal appears to be truly orphaned and its health seems to be deteriorating, an intervention could be considered in accordance with the instructions provided in these pages. Contact SOS Poaching – Wildlife Emergency first to know if it is possible to take the animal to a rehabilitation centre. In some cases, letting nature take its course may be the best option.

For more information on wildlife rehabilitation and required licences, refer to the section on keeping wildlife in captivity (in French).

Emergency interventions and specific advice for some wildlife species

If you find an animal that must be declared injured or dead, contact SOS Poaching – Wildlife Emergency at .

If you have any other questions about wildlife in Québec, contact the Department’s customer service at .

If you have been bitten, scratched or have been in contact with a mammal’s saliva, immediately clean the contact site with soap and water for 10 minutes. Promptly contact Info-Santé 811 for an assessment of the risk of transmission of rabies or other diseases.

In many bird species, chicks leave the nest and take their first flight when their plumage is not yet fully mature. As a result, although their plumage appears complete, they fly poorly and spend most of their time on the ground, hidden in vegetation. Their parents come to feed them regularly, so there is no need to put them back in a nest.

It is important to leave chicks where they are so that they can gradually learn to fly and so their parents can find them. If they are within easy reach of predators, they can be directed to the nearest vegetation bed. Most young birds will flee in the opposite direction when a human gets too close, so it is not necessary to touch them to get them to move in the right direction. Generally speaking, it is still preferable to avoid intervention as much as possible so as not to discourage parents from coming back to care for them. However, a chick that does not make any flight efforts when a person approaches and has ruffled feathers, closed or half-closed eyes may be orphaned.

A closed-eyed chick without any feathers found on the ground likely fell from the nest or was dropped by a predator who had seized it. Because birds are insensitive to human odour, the chick can simply be put back in the nest if it is spotted nearby. A damaged or unattainable nest can be replaced by an artificial nest made with a similar-sized container filled with grass or paper towels and secured near the original nest. It is important to make holes in the bottom of the container to prevent the accumulation of rainwater. If the mother does not return within four hours or the chick shows signs of generalized weakness, it is likely that the parents will not return and the chick could be taken care of by a wildlife rehabilitation centre. If this is not possible, nature will have to take its course.

In the case of birds of prey, since these species must be declared, you must contact SOS Poaching – Wildlife Emergency, as they may require to be taken in charge by wildlife protection officers.

Baby squirrels and chipmunks are regularly transported from nest to nest by their parents. Thus, it is not unusual for a young to be dropped on the ground or to get lost during the journey. If within easy reach of predators, it can be put back in a nearby shrub or temporary nest. They must be observed from a distance in order not to discourage parents from returning to look for them or from continuing to care for them. Baby squirrels or chipmunks will need assistance only if they show signs of general weakness or if the mother has not returned within 24 hours.

Squirrels and chipmunks are the only native mammals that may be kept in captivity without a licence. Citizens can therefore take care of these animals if they are orphans. However, it is not recommended to take care of an orphan without having the necessary knowledge to do so. If you wish to care for a young orphan, it is important to contact a veterinarian with knowledge of wildlife or a wildlife rehabilitation licence holder as soon as possible so that they can properly inform you of the necessary care.

It is normal to find young white-tailed deer alone in forest or hidden in vegetation. In this species, females do not stay with their young, especially during the first week after birth. Females return to their fawns only to breastfeed, usually at dawn and dusk. As the fawn grows older, it will explore its environment on its own more and eventually follow its mother after a few weeks.

If you find a fawn alone outside of a natural environment, you can try to direct its movements by making barriers with blankets so that it returns to the nearest woodlot. The animal must then be observed from a distance so as not to discourage parents from returning to look for it or continuing to care for it. Unless it shows clear signs of general weakness, it needs no further assistance.

You should never attempt to capture a fawn—you would only endanger the animal’s survival. Because white-tailed deer are a species that must be declared, if you think a fawn needs help, you must contact SOS Poaching – Wildlife Emergency. You will then find out if it is possible to take the animal to a rehabilitation centre. In some cases, letting nature take its course may be the best option.

It is common for the mother to leave the nest for long periods of time and return only at dawn and dusk. It is normal to see young hares exploring the land around the nest during the day. Since complete weaning occurs very early (at three weeks of age), it is common to believe that a young animal is not mature enough to be alone. If it is hairy, has open eyes and jumps, it is mature enough to leave the nest. Keep pets and visitors away from the nest and its surroundings. Hares and rabbits must be observed from afar so as not to discourage parents from returning to look for them or continuing to care for them. Unless they show signs of distress, they need no further assistance.

Please note that hares and rabbits can carry tularemia, a serious disease that is easily transmitted to humans. It is strongly recommended to avoid contact with a hare or rabbit that appears lifeless or unhealthy.

Babies are regularly transported from nest to nest by parents. It is not unusual for a young raccoon to be dropped on the ground or lost during the journey. If the young is exposed, it can be put back in a nearby shrub or temporary nest. The raccoon should be observed from a distance so as not to discourage parents from returning to look for it or continuing to care for it. Unless it shows clear signs of general weakness, it needs no further assistance.

They can also transmit the Baylisascaris parasite (raccoon roundworm), which can cause serious diseases in humans.

For more information, refer to the raccoon rabies webpage.