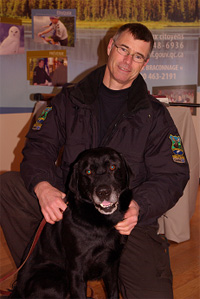 A canine squad was set up in 1995 to support wildlife protection officers working for the Ministère des Forêts, de la Faune et des Parcs (MFFP). Initially, there was only one officer along with its dog available to cover the whole of Québec, but new recruits were gradually brought into the Service from 2001 onwards to provide more complete regional coverage.

Once they have been through the selection process, officers and their appointed dogs take an intensive ten-week training course and must renew their certification each year to keep their skills up-to-date. The breeds of dog currently used are:

All the dogs that have joined the Wildlife Protection Service’s canine squad since 2012 have been German Shepherds.

The canine squad is involved in:

What a dog handler does

Handlers and their dogs can not only help save time during searches, but can also detect additional clues and uncover additional evidence during investigations.

Among other things, they chase down hidden or fleeing suspects, locate animals, carcasses or fish and even find devices that have been used in poaching.

A dog handler assigned to wildlife protection carries out more than 40 interventions per year. For maximum effect, the canine squad must be involved as early as possible in an intervention. 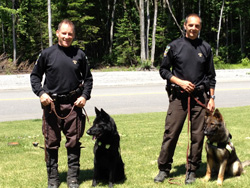 During basic training, scent detection is associated with a reward so that it becomes a game for the dog. When a dog identifies a clue, the handler rewards it by tossing a rubber toy known as a “Kong”. A dog has only one handler, and contact with other humans is reduced to a minimum. These dogs are not pets in the normal sense, but are trained to do a specific job.

The canine squad teams provide valuable support for the other wildlife protection officers and have become vital parts of many investigations, searches and arrests leading to convictions.