Flyer – Be on the look-out for invasive carps

What should you do if you think you have seen an invasive carp?

Be on the look-out when boating or fishing* or when walking along a water body.

It is useful to take several photos to confirm the specimen’s identification.

By telephone:
By email: services.clientele@mffp.gouv.qc.ca

Have in hand or send us the following information:

* Because of their feeding habits (filter feeders or herbivorous), invasive carps are unlikely to rise to a hook.

Your collaboration is important:

What are invasive carps?

Four species of invasive carp—silver carp, bighead carp, grass carp and black carp—were imported to the United States in the 1960s. The species, called “invasive carps,” have striking characteristics, in particular the considerable size that they can reach, their growth rate and reproduction rate. Invasive carps escaped from aquaculture sites and invaded the Mississippi River and naturally dispersed in its drainage basin.

Why are invasive carps worrisome?

After several decades of colonizing the Mississippi Basin, invasive carps now account for nearly 90% of the biomass in places and are significantly altering fish habitats, leading to a loss of biodiversity and the collapse of the availability of fish stocks. The United States and the Canadian federal government have implemented extensive measures to prevent the arrival and the establishment in the Great Lakes of invasive carps. It is estimated that the establishment of invasive carps in the Great Lakes region alone could cause the loss of several billion dollars in economic spinoff because of the negative impact they would generate on the sportfishing, subsistence fishing and commercial fishing industries, boating and tourism, in addition to the risk of causing major health problems. Impacts similar to those measured in the Great Lakes region are expected in Québec.

How advanced is the invasive carp colonization front in eastern North America?

The silver carp and bighead carp colonization front is only several kilometres from the Great Lakes in several places, including near the entrance of the Chicago Canal. Moreover, three bighead carp specimens were caught in Lake Erie in 1995 and 2000.

Since 1985, more than 150 grass carp have been caught in the Great Lakes. Most of the carps stem from introductions of fish that escaped from ponds. However, since 2011, reproduction has been confirmed in the Sandusky River in Ohio, which flows into Lake Erie.The distribution of black carp appears for the time being to be confined to the waters of the Mississippi.

What are the possible vectors for the introduction and propagation of invasive carps in Québec waters?

The potential vectors for the introduction of invasive carps are numerous and stem from natural processes and human activities.

Natural invasion routes into Canadian waters include the artificial link between the Mississippi River and the Great Lakes through the Chicago Canal. Invasive carps in the Great Lakes are set to enter the St. Lawrence River. Other natural or artificial connections can afford access routes for invasive carps, for example the link between the Hudson River and Lake Champlain and the Rivière Richelieu.

Certain human activities also pose a risk of introducing invasive carps into Canada, including Québec. For example, the use of live baitfish represents a potential pathway for the introduction of invasive carps since young fish can easily be confused with the fish usually used as lures. Activities at risk also include fishkeeping, maritime transport, the illegal importing of and illegal trade in live invasive carps for food, and religious rituals that involve releasing the live fish into the natural environment.

Are there invasive carps in Québec?

The Ministère des Forêts, de la Faune et des Parcs confirmed the presence of grass carp in the St. Lawrence River system in early 2017, based on the capture of one fish in May 2016 and the detection of the DNA specific to this species in water samples collected in 2015 and 2016. No indication of the presence of silver carp, bighead carp or black carp has been detected until now.

On what basis was the presence in Québec of grass carp confirmed?

A commercial fisherman caught the first grass carp on May 27, 2016 in Contrecœur. At the time of capture, the record size and weight of this fish (1.26 m and 29 kg) and the state of its reproductive system suggested that the specimen was more than 15 years old and probably sterile. A thorough analysis of the bone structure and organs of the specimen, in collaboration with North American specialists in this species, nonetheless established that it was a fertile female roughly nine years old.

In 2015 and 2016, the Ministère des Forêts, de la Faune et des Parcs conducted sampling campaigns aimed at detecting the presence of invasive carps through environmental DNA (eDNA) analysis. The analysis of animal DNA fragments in the environment (eDNA) is a technique that is especially sensitive and effective to detect the presence of invasive species, even in low abundance. The analyses were completed in early 2017, in collaboration with the team of Professor Louis Bernatchez, a leading expert in the realm of fish genetics, at Université Laval. The presence of grass carp DNA was detected at several sites and in several water bodies in the St. Lawrence River, between Lac Saint-François and Lac Saint-Pierre, and in the downstream portion of the Rivière Saint-François and the Rivière Richelieu. No trace of silver carp or bighead carp DNA has been detected. The presence of black carp DNA has not been evaluated for the time being.

The capture of a specimen in Contrecœur in May 2016 and the findings of eDNA monitoring indicate that grass carp is present in the St. Lawrence River and at the mouth of certain of its tributaries. The information now available neither allows for an estimate of the abundance of the species nor to verify if reproduction and recruitment are occurring in the river.

Is grass carp less worrisome than the other invasive carp species?

No. Grass carp feeds on aquatic vegetation. Given its rapid growth, voracious appetite and feeding habits, grass carp can significantly damage fish habitats, disturb the functioning of aquatic ecosystems and harm water quality. Even without establishing a viable population in the long term, grass carp can significantly damage aquatic-grass beds on which numerous indigenous fish species depend for food or reproduction. The species can live for up to 20 years and quickly reach a size that means that is not threatened by most aquatic predators. What is more, the historical background of colonization by invasive carp species reveals that the establishment of the grass carp facilitates the establishment of the other three.

What is the Ministère des Forêts, de la Faune et des Parcs (MFFP) doing to the prevent and control the invasive carp invasion?

Invasive carps have a significant impact on the environments that they colonize. The MFFP is highly concerned by their presence in Québec waters and will continue to act on several fronts to confine their propagation elsewhere in Québec by targeting priority actions.An early detection network has been established to actively monitor sectors of the St. Lawrence River and its tributaries at greatest risk of the arrival of invasive carps. Different tools are being used to ensure such monitoring, such as environmental DNA sampling (animal DNA fragments in the environment) and the use of fishing gear adapted to invasive carps, including electrical fishing. The collaboration of commercial fishermen, recreational anglers and recreational boaters is also being sought to ensure that they remain vigilant during their activities and report as soon as possible any sighting of invasive carps. What is more, the MFFP is operating an emergency line to receive reports of invasive carps.

To act on the propagation vectors of pathogens and aquatic invasive species, the MFFP intends to pursue the establishment of sound cleaning practices for small boats and the management of water in fishponds. Special attention will also be paid to the management of dams and fishways to limit the propagation of invasive carps from the St. Lawrence River to internal waters.

Furthermore, the MFFP announced on February 28, 2017 the implementation of measures to restrict the use of baitfish in Québec. This decision stems from the recognition that the baitfish trade and the use of baitfish for sportfishing are vectors for the introduction and propagation of pathogens and aquatic invasive species, including invasive carps.

What are the changes to the regulations governing baitfish?

As of April 1, 2017, the use of live baitfish will be prohibited during the winter throughout Québec. What is more, in order to reduce the risk of propagation of weed fish, the MFFP reminds the public that the procedures announced in 2012 whereby the use of dead baitfish is prohibited during the summer, as is the importing of baitfish into Québec, also take effect as of April 1, 2017.

Accordingly, only the use of dead baitfish for winter fishing is allowed, in fishing zones where the practice was already authorized. 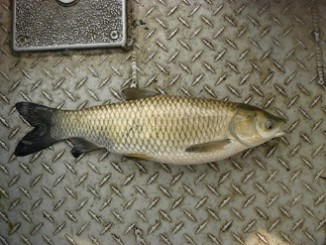 Colouring: olive brown back, a slightly golden shine on the sides and a white belly.

Habitat: Aquatic-grass beds in lakes, rivers and ponds. Tolerates a broad range of temperatures and low concentrations of oxygen. Channels and deeper zones during the winter.

Reproduction: Reaches maturity around the age of 3 years. Reproduction in the water column (pelagic zone). More than one spawning episode per year can occur, usually when the water warms up at the beginning of the summer.

Colouring: silver body, olive to black on the back and head.

Reproduction: Reaches maturity around the age of 3 to 4 years. Reproduction in the water column (pelagic zone) following the rising stage.

Other characteristics: Can leap out of the water when frightened. 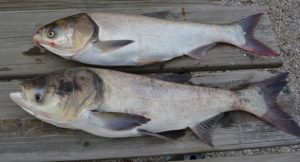 External traits and characteristics: Its eyes lie below the centre line of its body and lower than its mouth; a big, terminal, upturned mouth that is disproportionate in relation to the size of its head; forked tail; small scales; lateral curved line from the top of the head to the tail; mouth without barbels; short dorsal fin.

External traits and characteristics: The eyes are at the level of the centre line of the body; forked tail; very large scales with dark edges; mouth without barbels; short dorsal fin; fused, hard gills.

Food: Mussels, snails, crustaceans and other organisms living on the bottom of watercourses.

(the species has been established in Québec for over 100 years) 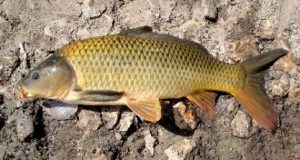 Body shape: elongated body during the first years of life that becomes increasingly squat with age.

External traits and characteristics: The eyes are higher than the centre line of the body; forked tail; large scales; protrusible mouth with barbels; dorsal fin with a long base that extends over two-thirds of the back.

Habitat: Slow currents in canals and rivers with mud or grass bottoms.

Food: Omnivorous. It feeds by digging sediments with its mouth, which contributes to roiling the water.

Reproduction: From June to July, in aquatic-grass beds. Adhesive eggs attach to the vegetation

Other characteristics: Naturalized populations have existed in Québec for more than 100 years. Elsewhere in the world, the common carp is considered to be a highly harmful invasive species, especially in Australia.

It is not one of the four invasive carp species.